Sports Leagues have required sponsorships since their inception years ago. The act of a company or an organization looking to “endorse” or “sponsor” a sports team or an athlete has been around since the beginning of commercial sport. It’s simply a mutually beneficial relationship as each gets a stake in the other. When it comes to sponsoring companies however it seems that more often than not the lead or main sponsors are sports brands – namely Nike, Adidas, Puma and Reebok. This of course has grown over the years to include telecommunication companies, banks and restaurant chains. In recent years, however, there has been a rise in online casinos and land-based casino’s getting in on the sports sponsorship deals. 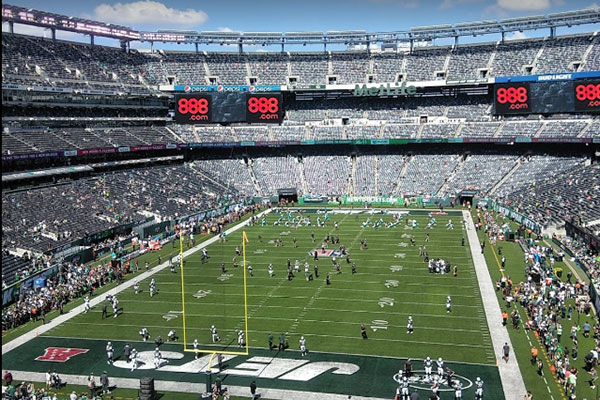 During the NFL’S annual league meeting back in March of 2019, the NFL (National Football League of America) gathered 32 of its owners where they were given communications on how the NFL plans to lodge the legalization of sports betting on a massive statewide level. The meeting had three important points it wished to convey to the league. First was the importance of the matter being discussed. It was reported that nearly an hour alone was dedicated to discussing this matter. The second was just how open the league is pursuing and receiving sponsorship from organizations in the gaming industry. The third point irritated was just how deadest the NFL was on the idea of statewide sports betting legalization.

The fear of entertaining this talking point is of course rife with controversy as this has never been done before. In fact, America is rather strict in their regulations of online gambling casinos and as of the time of writing this there were only 4 out of 52 states that have legalized online gambling. These states are New Jersey, Nevada (duh!), Delaware and Pennsylvania, which makes the initiative of legalizing statewide sports betting rather difficult. However, there is an inkling of hope to make this a reality. As of May 2018, the state of New Jersey who has been at the forefront of legalizing online gambling made it possible for any state to legalize sports betting. At the moment there are eight states that have legalized sports betting with more hoping to move in the same direction.

One of the other main concerns of going through with this is the ethics component of it all. How will the NFL prevent activities such as throwing games, and illegal sportbooks that rake in billions in illegal betting each year. The NFL owners have agreed that this step needs to be taken carefully and though out thoroughly. All angles will need to be combed through with a fine comb to ensure fair practices and good faith with sponsors, teams, players and spectators. At the moment the only contact that the NFL has had with the online gambling industry is when 888 Casino sponsored a stadium. What is being proposed however, goes far beyond that.

The MLB Has Already Embraced It

Of course, the NFL has valid reasons and concerns to measure before getting in bed with online casino brands. However, the act of gambling industry companies sponsoring sports teams and leagues is nothing new. In fact, the NFL may have a model to follow. The MLB, America’s baseball league has been rather enthusiastic in embracing legalized sports betting. In fact, the NFL is slowly moving forward with the idea. In September of 2018, the Dallas Cowboys became the only NFL team to score a deal with a casino, albeit not an online operator but a land-based on. They scored a deal with WinStar World Casino and Resort, which will see the casino’s logo splashed out at the Cowboy’s amenities and properties, as well as their mobile app and their webpage. The NFL body hopes this move is the first of many as other teams look to get in on the action too.

It’s Happening on a Global Scale

The NFL may have good reasons to be wary about the proposed plans, however, this relationship between gambling operators and sports teams has been going on for ever and all over the world. In UK for example, Betway Casino, which is a leading online gambling sportsbook has become one of the biggest football sponsors in recent years. The betting operator currently sponsors some of the top football club – West Ham United. It has since paved the way for other casinos to get in on the action as well. In Ghana for example the betting site sponsors player Ashanti Gold and Kenyan team Mthare United. They have been able to help these African teams and players to earn more sponsorship, build better facilities and hire world class coaches. In South Africa, Betway also has a huge presence and for the longest time was the only betting site in the country. The sportsbook is currently in the process of negotiating a deal to sponsor sports tournaments and activities in South Africa.

Why have Casino Sponsorships in Sports?

In simple terms, it's extremely lucrative. Casino brands are looking to be normalized and not seen as taboo. Associating themselves with Sports Clubs and Leagues is probably the best way to do that. Sports brings fans together and people of all creeds together and for casino brands to be seen by all these people as a normal part of the sporting process will mean more people pay attention to them. It boosts brand awareness on a magnified scale, fans will be able to see their favourite players donning sports gear with these operator’s logos on them, and these logos will be put on boards around stadiums and pitches. The rise of awareness leads to boosted sales and in the case of casinos – more players using their brand and making them money. Sports leagues and clubs get the funds they need to operate efficiently and successfully. See, like we said – it’s a mutually beneficial relationship.