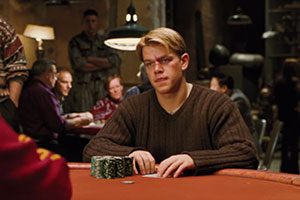 When you are in the entire gambling zone, you would want to live the story even when you come into your home. There is nothing else than sitting at home and watching some good casino movie. Lots of them caught the right moment or were made by a true story and will hold your attention on a high level through the whole movie. It was really hard for me to pick five of these films and tell you that this is it, this is what you need to proceed into the gambling world.
There are maybe five of them here, but you won’t be wrong if you start watching all of them. Every single movie hides its simple story that will make you go “wow” in the end. Even a regular watcher, who is not a gambler, will tell you that casino movies are one of the best movies out there. With 100+ casino movies to watch, I found the top five you should start with.

I started with this film because it’s classic. The perfect cast with Robert De Niro, Joe Pesci, and Sharon Stone, will leave you speechless. There is a reason why this movie is called Casino and why many people recommend it. If you love the royal casino slots, this is the first movie you need to watch right away.

Pay attention to the story. Maybe some tricks are hidden in there. You would want to learn something new.

This movie is becoming a classic. It’s the remake of 1974 classic, and Mark Wahlberg plays the role perfectly. There are lots of interesting facts and life lessons you can take out of this movie. It’s about a literature professor who has a simple approach to his life: You either win everything or nothing at all. This makes him enter the casino and create a big gambling addiction. It all starts with him owning a significant debt.

Are you ready for this movie?

I had to put it right here because this is another of those must-watch movies starring Clive Owen. He is the croupier at the Golden Lion Casino. That’s a casino in London. He found himself attracted to the casino world and lets it take over his life. But, he doesn’t like being a roulette croupier, but he is awesome at it while enjoying to watch gamblers lose. It was a great jumping point for Clive Owen to start with his career.

I saved the best two for last. It’s a good movie for those who want something that’s between a gambling movie and a real heist. It’s a story about a few college kids who want to make some money for whatever they need. In a great turn of events, their wishes are met by their professor. And the role of the teacher is played by the fantastic Kevin Spacey. It’s a great movie that includes two of the most important tools in casino games, in particular blackjack strategies,: counting cards and math

It’s my favourite movie. This is a story about a college student who is always getting caught in a lie by his girlfriend. Everything starts when his long-time poker buddy gets released from jail. I won’t let out the whole story, but I tell you one thing, this is an enjoyable movie for those who want a good story about relationships, card games, bravery, and gambling.

So many people will be able to relate to the story of this young man Mike McDermott played by Matt Damon.

There you have it. The top 5 casino movies you need to watch right now. You can start tonight.