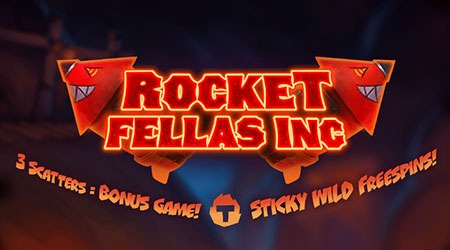 Thunderkick is part of the new school of online casino software developers and launched their small design firm in 2012. Based in Stockholm and Malta, Thunderkick has already made a name for themselves among virtual slots fans worldwide. The mad geniuses at Thunderkick have created some amazing slots with the likes of Yeti – Battler of Greenhat Peak and Bork the Bezerker (Hack ‘n Slash edition) attracting thousands of slots fans both young and old. Their latest release, Rocket Fellas, promises to be every bit as exciting and as innovative.

Thunderkick are great at taking classic themes and giving them a fresh, quirky and interesting twist. Whether it’s Vikings, Mexican wrestlers or pink elephants, you can be sure of a unique and rewarding experience. Rocket Fellas follows the same creative path, this time focusing on a group of mad men who are trying to get precious stones out of an old mine by using rockets! 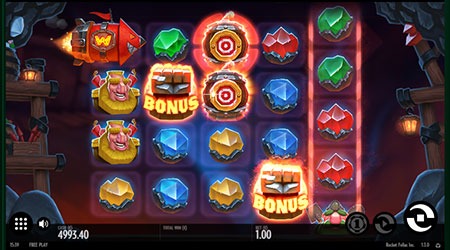 Rocket Fellas features 30 fixed paylines over 5 reels and some of the best graphics and animations you will on any slot this year. The funky soundtrack adds even more flavour as you line up wild rockets and barrels with bulls eye targets on them. As soon as you have rockets and bulls eye barrels showing up at the same time, you’ll see the rockets blast their way across the reels, leaving even more wilds in their wake! If you’re new to how most online slots work, wild symbols will replace all other symbols to create fast and easy winning combinations. The only symbols they don’t replace are scatter symbols, which have their own job to do.

Rocket Fellas features rich graphics, with all sorts of precious stones, as well as the as the crazy fellas themselves, as symbols ready for you to combine into winning lines and combinations. Look out for the clenched fist bonus logo as this is the scatter symbol in the game. Getting three or more of these bonus scatter symbols to appear across the 5 reels will trigger the game’s bonus round.

The bonus round takes you to a new scene in the game, somewhere deep in the gem mine. This time, the wild rockets are now wild rocket fists and you get an instant 10 free spins to try and knock out as many precious gems as you can. During the bonus round, landing more fist scatter symbols will add extra free spins to your total. In the bonus round, when a wild rocket and a barrel show up on the same row, the barrel is transformed in to a sticky wild. Sticky wilds stay in place while the reels spin, giving you even more chances to score huge winning combinations.