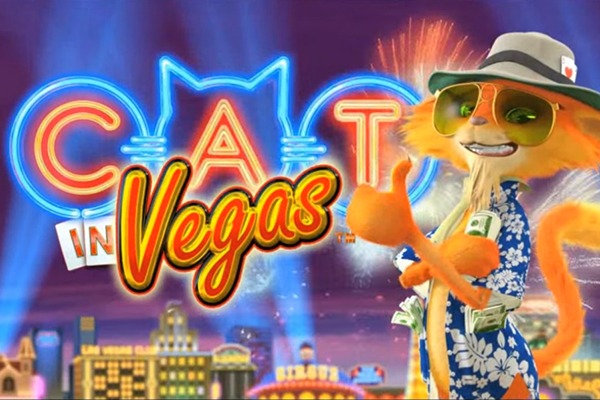 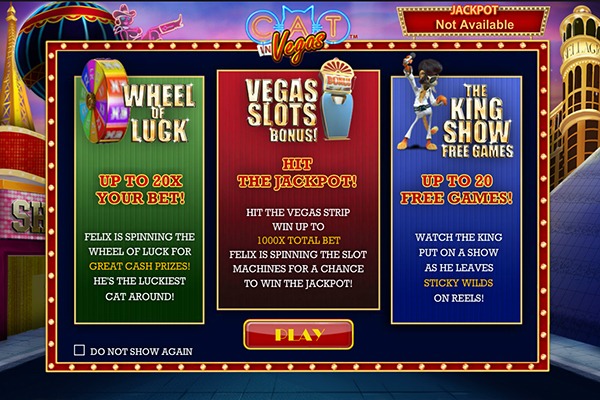 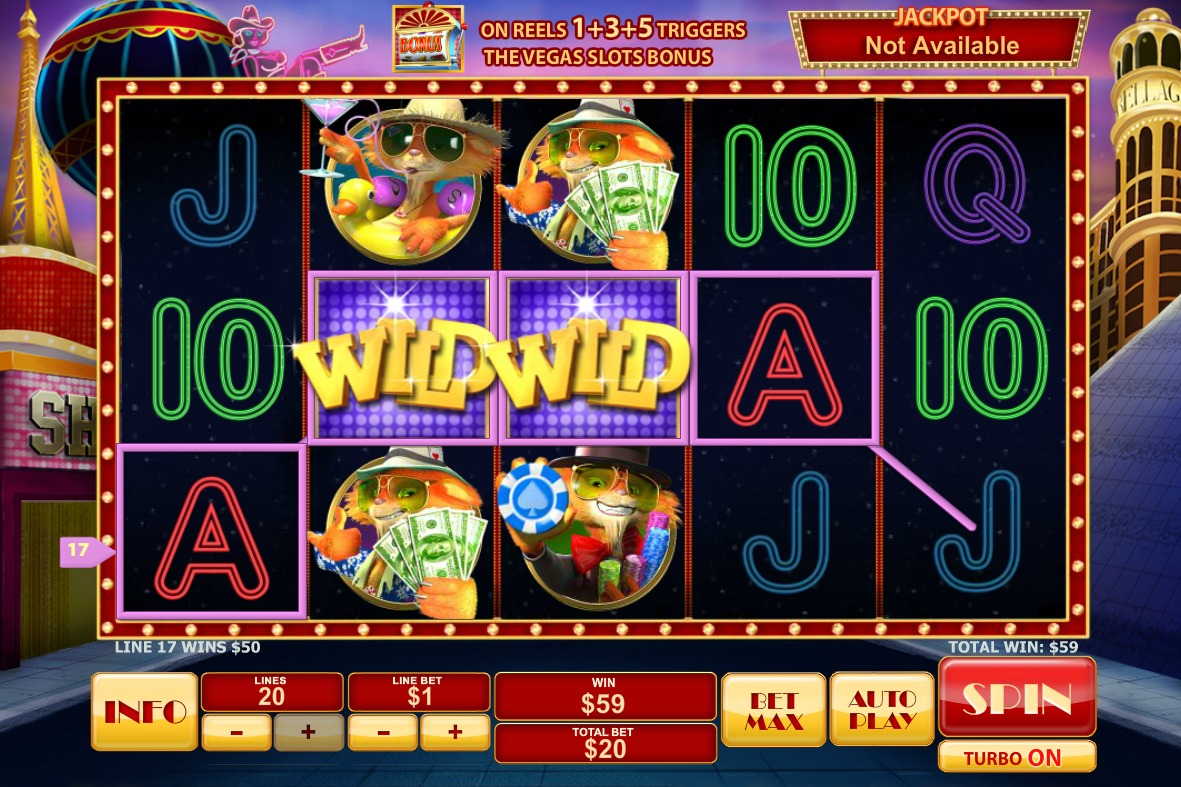 From the very first moment playing this game, we are introduced to a shiny and spectacular world that Playtech provides us with the Cat in Vegas video slot, launched in November 2014. The intro sequence takes you for a ride that resembles a scene from the famous ‘Fear & Loathing in Las Vegas’ movie – this time with a cat in the lead role instead of Johnny Depp. The adventure then turns into a gambling experience like nothing you have seen before.

What you see is what you get is what could be the worst way to describe a fabulous slot like Cat in Vegas. While you see a lot of fancy and glittering casino lights, this slot has more in store for you – several bonus features with a possible payout of up to 200,000 credits, a progressive jackpot, and of course, marvelous graphics. Although most online casinos in Canada do not have Playtech, it is well worth searching for.

Like many of Playtech’s online slots, Cat in Vegas is a standard 5-reeler with 20 fixed paylines, and many high-value symbols that pay handsomely. You can wager anywhere from 0,20 to 2,000 of your favorite currency for each single spin. The fancy dressed cat symbols will reward you decently if you land five of them, while the Wild symbol can make you immensely rich when you land five of those on an active payline.

The Wild symbol is a large, golden ‘WILD’ sign that will substitute for all other symbols except The King Show, Wheel of Luck bonus symbol, and the Vegas Slots bonus symbol, all of which trigger their respective bonus features. As above mentioned, along with helping out with forming winning combos, the Wild symbol can reward you, especially if you land five Wilds on a payline.

Like we said before, this game reminds us of a famous movie that is placed in Las Vegas, and the titular Cat takes the role of the protagonist from this famous movie. We can definitely say that the Cat packs a lot of visual entertainment. Other video slots might rely heavily on 3D animations and action-packed scenes to fill their game play, but Cat in Vegas has very solid and visually pleasing graphics that will not leave you asking for more.

The audio portion of the game is reminiscent of most of the best real money online slots, with the intro sequence and the bonus rounds offering additional sound effects that make it a lot more appealing. It has the right amount of background music and sound effects to keep you interested, but not to be overly intrusive while you are playing.

Lucky players who manage to land three Vegas Slots Bonus symbols on reels 1, 3, and 5 can expect to be richly rewarded for their efforts with instant cash. The game will take you to a separate screen where you can pick any of the four slot machines to receive cash prizes until it breaks down. You must also know that any pick can result in a jackpot prize. The meter above each machine has a light, and if all four of them light up, you win the jackpot, which is 200,000 coins and can amount to $1 million in cash.

When it comes to special features, Cat in Vegas has it all. The free spins are triggered by landing three of The King Show Scatter symbols on reels 2, 4, and 5. The game will take you to an Elvis Presley show that can award you with up to 20 free spins and 5 Sticky Wilds. The Elvis impersonator will then dance to determine where the Wilds will stand in place while the Free spins round lasts.

If that weren’t enough, there is also a Wheel of Luck mini game, where our Cat will spin the wheel and determine which prizes you will receive. You will keep winning prizes until the wheel lands on a previously awarded prize. 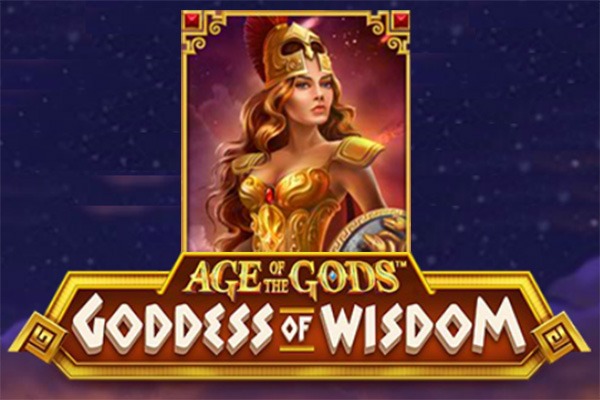 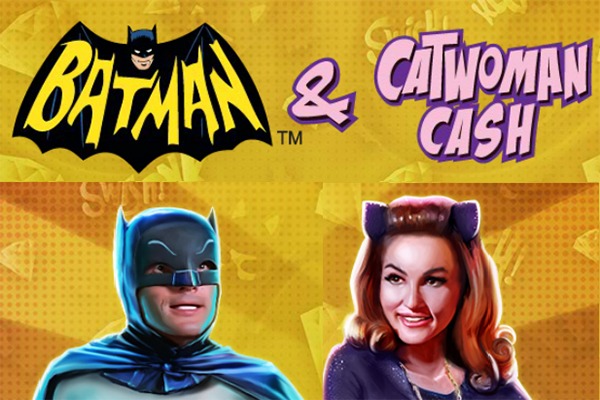 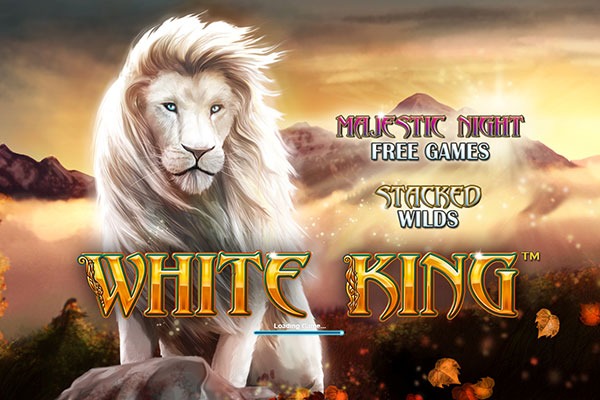